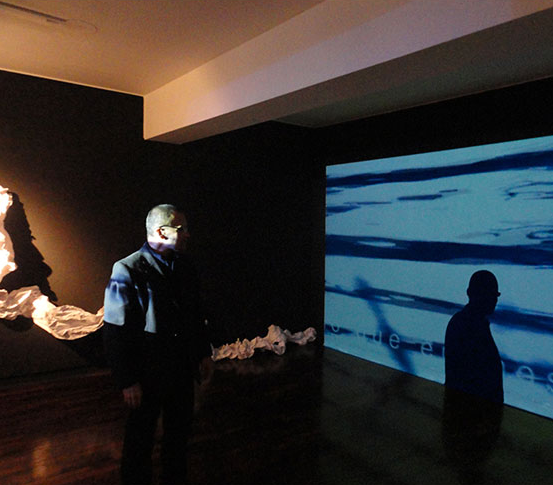 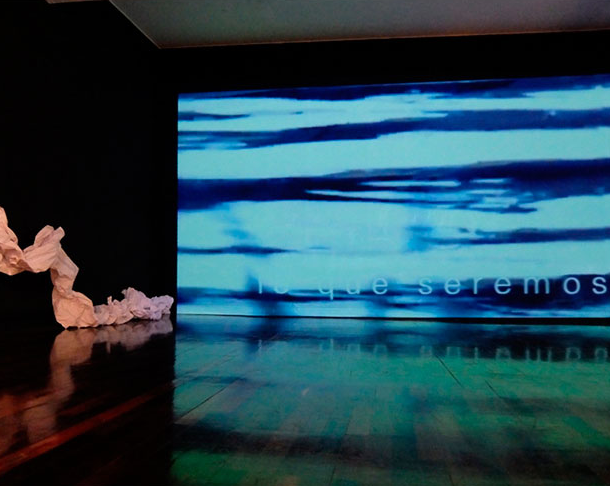 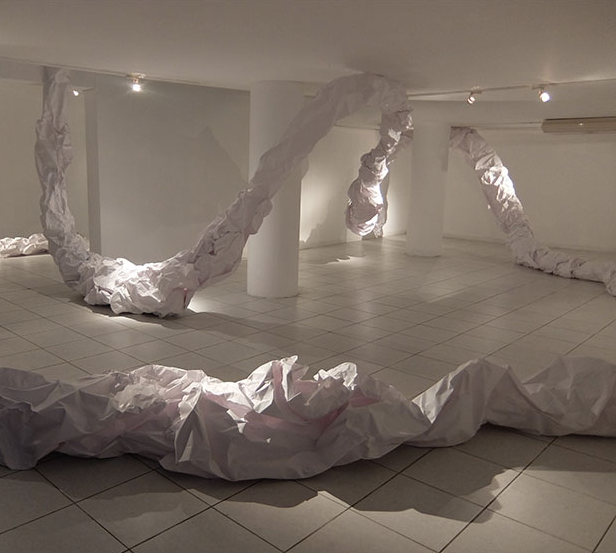 [english]
The grandfather of Peruvian artist Carlos Runcie Tanaka crossed the Pacific Ocean to get to Perú to start a new life. He was a Japanese-born immigrant. Thirty years latter, after raising a family, he was drowned in the sea of Lima (the capital of Perú). The sea brought him to Perú and sealed his destiny. The crab is a sea creature that lives on the beach. For the artist the crab is a symbol of the immigrant. 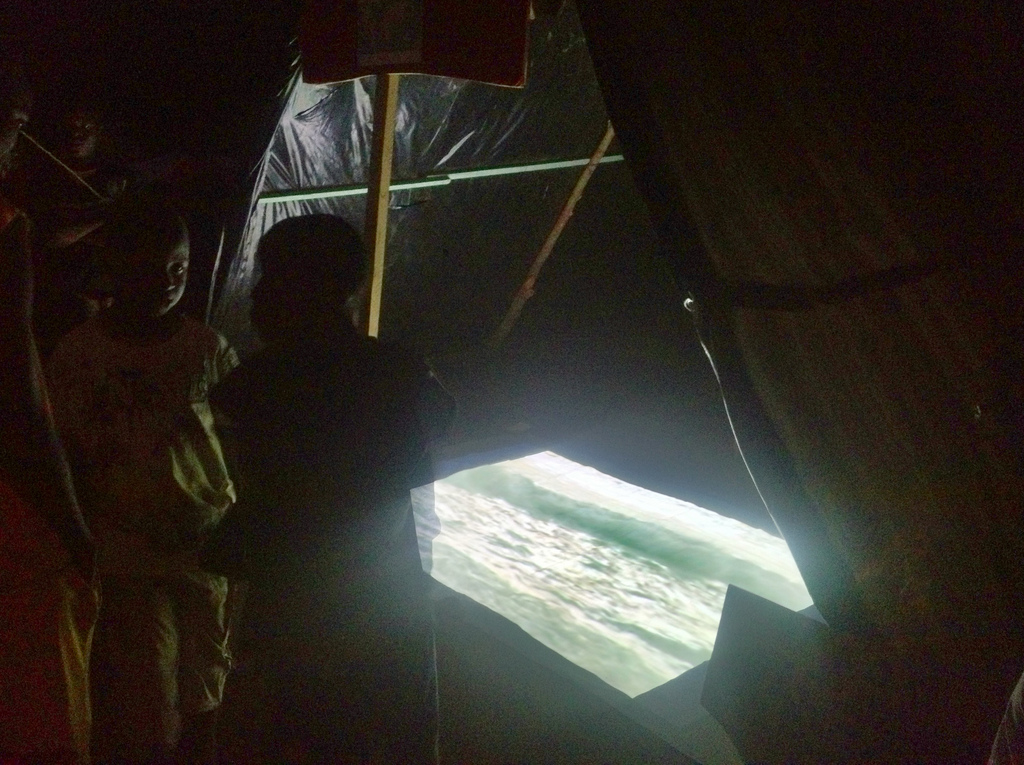 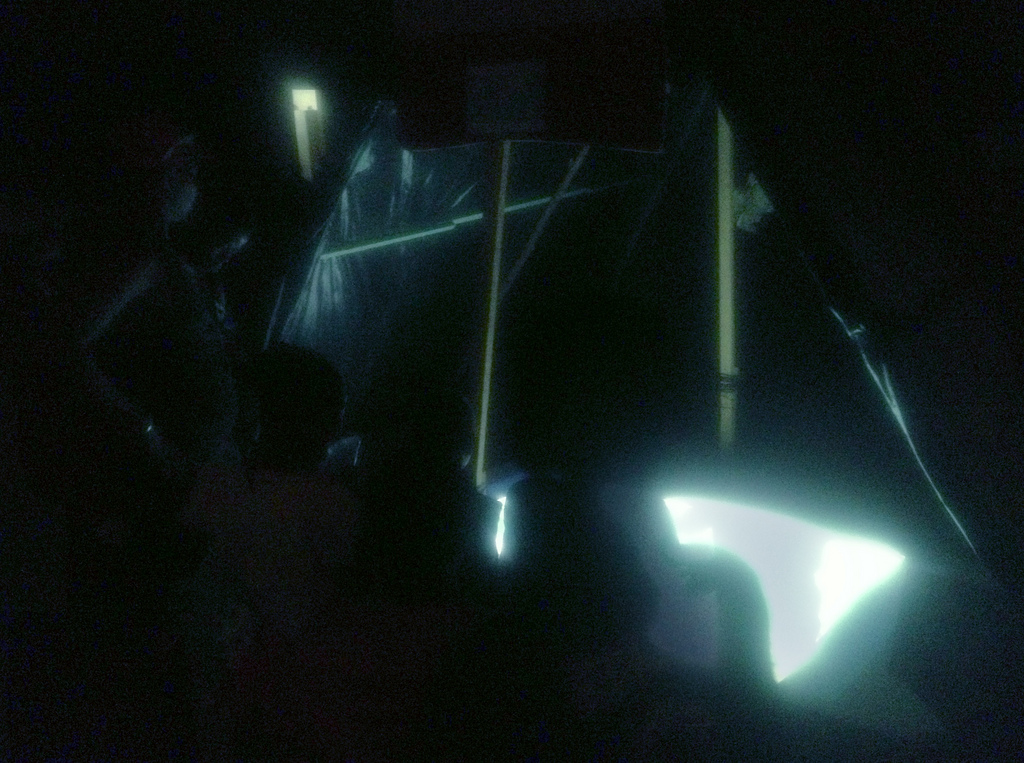 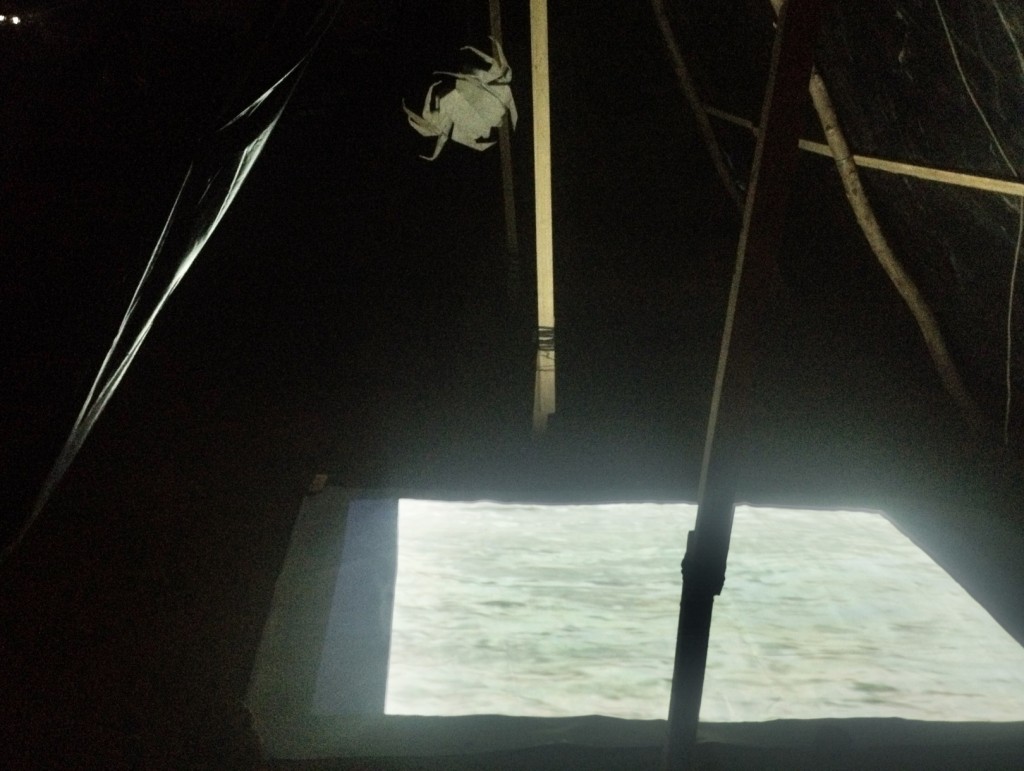 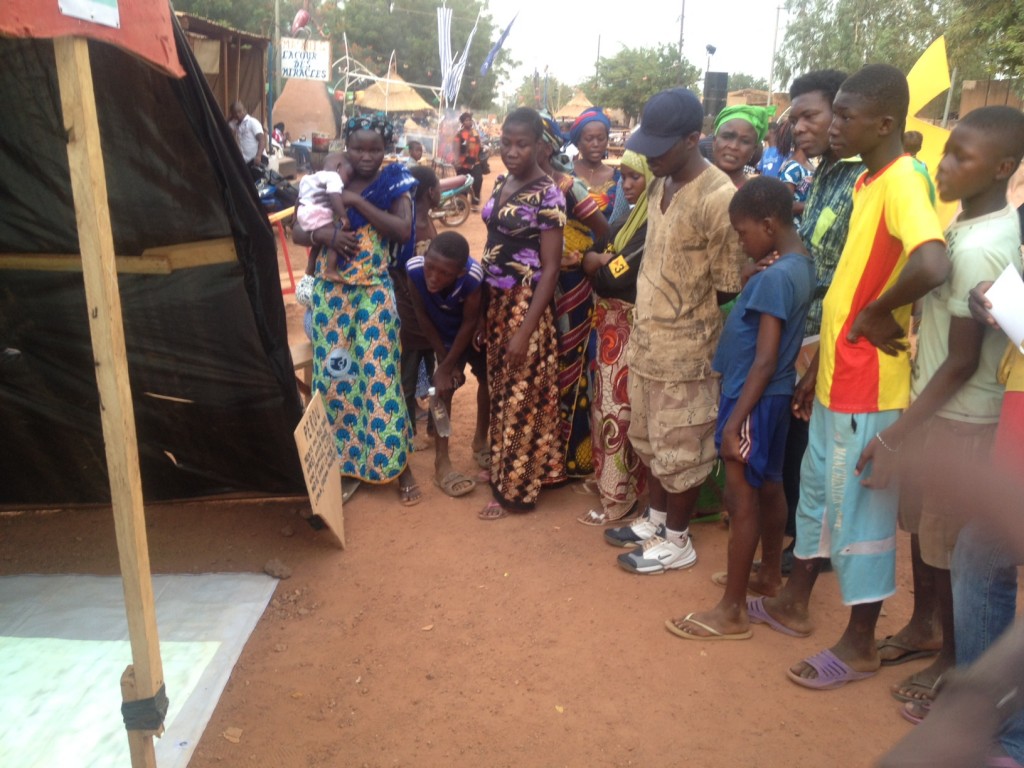 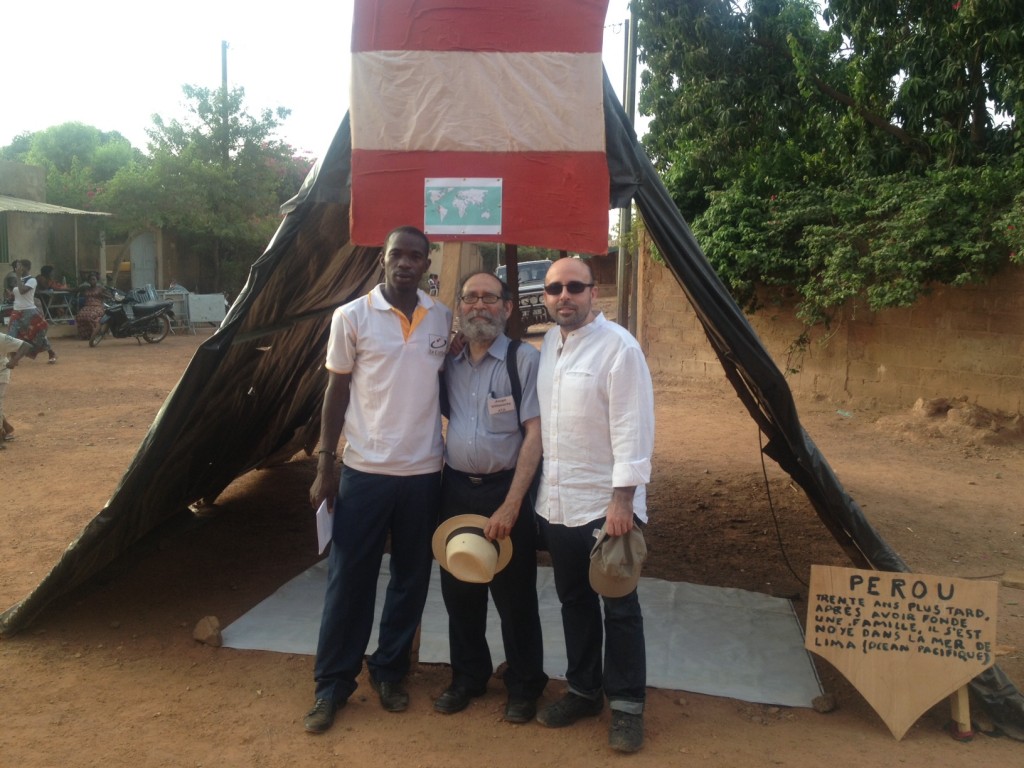 (a liquid voice, pour’d over thy mountains)

This project presents a general overview of the alternative artistic works done in Perú in the last three years. Since 1998, on the occasion of the 2nd International Video Art Festival held in Lima, Perú, new artistic proposals are being frequently created using new technologies.

“Perú PER Muta” is made of selected works specially prepared by Peruvian artists that have been developing themselves in electronic art, and by others who use it as a support for mediated dissertations.

Different artists from different generations and activities have been chosen. All of them use electronic arts as a creative tool for developing new Peruvian ideas and thoughts.

The project is divided in a Peruvian Video Art Selection projection (75 min) and 5 artistic proposals to be installed at the Interferences Festival.

This Peruvian video art anthology tries to show the relevance of this media in Perú, as a new way to broaden and extend in the creative universe, against the traditional artistic proposals that made Peruvian art a useless attempt regarding our social context. For the selected artists, video and non-traditional media are shaping the way to free themselves and provides a unique opportunity to express their thoughts, to represent their very own perception of reality. Electronic art in Perú, in it’s initial stage, can be defined as the new creative metaphor recognizable with the mass, the young Peruvian audience, an audience which looks forward to a chance of expressing in harmony with their reality.

organized by ATA and Peruvian artists

According to the dictionary, the term “interference” can be defined as a “perturbation on the reception of radiophonic emissions because of superposition of two different wavelengths”, in few words means perturbation in the reception of emissions from a source. We are talking about altering a message (information) between two points, where the transmitter, the message and the receiver are present. In case any of these components is missing, we couldn’t be able to talk about any kind of emission. When the elements are present in this circuit and nothing interferes between the transmitter and the receiver (which will imply a misdecodification of the message), we could affirm that a successful communication is taking place.

There are several ways to “interfere”: A TV show with no audio signal, a website that never gets to download completely because of several problems, or a telephone conversation in which a third party never answers, are all forms of interferences. But these interferences are not something recently discovered with the sudden lift off of telecommunications: there have always been interferences; everytime we talk about internet, TV or telephony, we’re not talking anything else but of communications, of information transmitted between two or more points.  In this level is that the generation of interferences gets interesting, because since it is a basic communication scheme, it’s possible then to apply it to any media.

–       A small, closed, dark space, that doesn’t let the audio get involved or mixed with sounds from other works and spaces.

* The audio will come separately from each TV set.

Iván Esquivel, (1971) Exhibits in various collective expositions since 1991, used the name ‘Plaztikk’ since beginnings of 1998.  Studied Art at the Pontificia Universidad Catolica del Peru, continuing his career through professional photography and graphic design.  His interest in electronic manipulation began in 1995; in 1997 developed his first web site and in 1998 produced the video clip ‘number’, that has been shown regularly at MTV.  He develops his works mainly as installations and electronic media.  Currently he is developing a cartoon and an interactive program of electronic music. His website is http://www.plaztikk.com/

Title of the Project: “Covers / Portraits”

Our urban space (Lima), surrounded by a social reality (Perú), where after an aggressive social climate (terrorism), with a current government crisis, where fear is still hanging around, only remains as a space open to development, and this has many forms; here comes the particular existence of the ‘creole’ factor (creativeness), with a huge extension for the “resourceability”.

I do not take the common citizen –I truly don’t know what this is-; what I know is what he has learned from a TV Set, from a game console, complementing his studies. Now is when he must be something, someone, in gender and in number; everyone is asked to be part of something: you’re here for something (what about being here just like a passer-by?)

To be, being, being part of… he only wants to watch. But not everything is perfect, and finding obstacles and censorship is not what he likes, and what if he doesn’t need to be in touch with anybody? So he must have information and access to it, but he’s restricted, we must fight for aperture. But the enemy is big.

He needs help; although not alone, he thought he was.

I need information about the possibility of using unused industrial material, for example, car parts or some kind of metallic unused material.

Roger Atasi (Lima, 1976).  Studied Fashion Design at Geraldine Fashion Design School (1993) and art at the National Art School, from march through august, 1993; besides, Roger has taken place in several painting and sculpture workshops in the art museum in 1993 and 1994. After that, he went in 1995 to the Autonomous Art School, and participated in some literature, photography and film direction seminars. He has shown his works at the 2nd, 3rd and 4th International Video Art Festivals in Lima, Perú (1998-2000); in the collective exhibition “Non Places Geography” at the Spanish Cultural Center (February, 1998); collaboration with the French artist Olivier Agid in RADIO IMAGE (November, 1998); again at the Spanish Cultural Center, he presented the video installation “KILLING FOR LIVING” in the exhibition “Yohny for Sale” (march, 1999) and in “VOLATILE BODIES”, part of “The (CH) Solitude Maze” Project (April, 1999).

Project Title: “Feet on the Ground”

This work tries to question the “free” information offering, uncontextualized and alienated information to which we are subdued inside the global interconnection frame.

–       Racks or supports for the projectors, which will be mounted perpendicular to and above the ground.

Title of the Project: “Relay/Breakdown”

The “Relay/Breakdown” Project takes as it’s starting point the conception of an unexpected (frequently traumatic) event that pierces the surface of quotidian life as an interference on our vital experience, although it is assimilated to it. To approach this issue of the surface of daily life as always on the verge of breaking up, or already broken, the work employs real time as a way of interwining with the quotidian. On one hand a video camera registers the daily activity of the town (it will be installed outdoors, on a high transit area) and on the other hand, a computer connected to the web will access different pages that register and document events that signify a breaking of common experience for its participants (ranging from accidents to violent events, private and public, individual and communal). In a closed environment a multimedia projector connected both to the computer and the camera will project randomly the input that comes from both sources.

–       Computer connected to the internet with video output

Title of the Project: “Limit Zones”

The Habitat – the crab that digs into tunnels in the sand, to position itself in a more humid zone, always between water and earth.

The Perimeter – the constant flow of water-earth, “the waves of the memory”

The Activity – the action of food ingestion (education?) afterwards returned in the shape of small spheres (knowledge spheres); the act of pleasure (the crab’s own alimentation)

The space is seized with a clay element worked in situ and complemented with a video projection.

Carlos Runcie Tanaka (Lima, 1958). Studied pottery at “El Pinguino” workshop in 1978.  He was then invited by Master Potter Tsukimura Masahiko to work as his apprentice in Ogaya, Japan (1979), and later went to Mashiko as a guest assistant to Master Shimaoka Tatsuzo. From November 1981 to April 1982 continued studies in Florence, Italy, with a grant from the Organization of American States (OAS). In 1986 he was given another grant form the OAS to study crafts design in Brasilia, Brazil. In 1989 Runcie held an individual exhibit at the OAS Museum of Modern Art of Latin America in Washington D.C. and in 1990 had another one at the Centro Cultural de la Municipalidad de Miraflores, an important exhibiting space in Lima, Peru. In 1991 he received the “Ciudad de Mexico” Scholarship, representing Perú at the IV Havana Biennial in Cuba. In 1994 held the “Displacements: Spatial Images of Discontinuous Traditions” Exhibition held in the Museo de la Nación, Lima, Perú. “Displacements” was a multimedia installation which focused on ceramic objects as a mean to achieve a linkage between these two cultural driving forces, immigrant and native. The crabs recollected at Cerro Azul (130 kms. south of Lima) became the leit motif of the exhibit, representing the circular experience of movement, stillness, life and death. During 1996, Runcie took part in “La Espera” (The Wait), an installation shown at ARCO 1997, Madrid, Spain. In august 1997 he exhibited “La Cuenta del Cangrejo” at the Museo de Arte Contemporaneo, Santiago de Chile, Chile. “Tiempo Detenido” (“Standstill”) is his latest work Shown at the I Bienal Iberoamericana de Lima in 1997.

(Lima, 1977). Poet, photographer and sensorial designer.  His recent participation at the 3rd and 4th International Video Art Festival in Lima as part of the organizing committee led him to explore the vast fields of video-creation. As Cultural Coordinator of ATA he has been involved in artistic activism in alternative areas of knowledge, as well as the development of over 30 productions in cooperation with Peruvian and international artists. At present, studying at the Communications faculty of the Universidad de Lima, his interests in the career develop in the forms of filmmaking and journalism. He has published several poems in local literature magazines. His next project talks about the future nostalgy of a constant feedback to the 80s decade.

The Meaning of ATA

Alta Tecnología Andina (Aloft Andean Technology) is a non-profit organization created to collaborate with the formative aspect of those who are going to be activators of creative intelligence, of inventions, of the new origins of a humanizing and re-naturalizing world. By this means we would cover all fields in human activity, with the development of techniques and loggias in the production of goods and services in every sector of the economy, as well as the development and growth of the applied scientific investigation. This will contribute with the re-evolution of the world and Perú within the planet.